Alright…even though I’d thought that I would write this piece soon after the previous one but it still took so long. But better late than never. So here are the details of my experience with the Carnival of Germany – which is called “Fasching”.

While in Germany on a business trip in February, I’d been hearing a lot of stories about the Fasching – which is basically a period of merriment before the fasting for Lent begins. There are several stories behind the celebrations – one of which is to chase away the winter ghosts (people dress up in scary get ups for that). Each region has its own way of celebrating but the aim is the same – to have fun. I was informed that the celebrations are at their peak in Cologne, where there are public holidays during this time. The mayor’s office is taken over by the women of the city and on the first day of the carnival, women are roaming around with scissors to cut off the ties of the men wearing them :-).  The traditions run so deep that in some places, even the costumes have been handed over generation after generation.

So, there I was – armed with all this knowledge and enjoying “Berliners” (jam stuffed donuts) on a Sunday, the day when the carnival parade at Mannheim was scheduled. D had told me about it almost a week before and I’d asked a few people around if they’d be interested in going but got no positive answers. 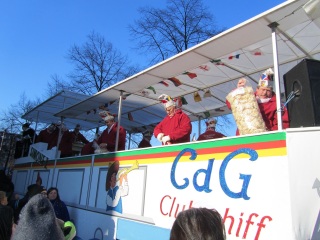 Now as providence would have it, D called me Sunday morning to check if I had made plans with anyone to go there, and on hearing no, he offered that we could go together. And so we went, on a super cold but a bright Sunday afternoon to the city of Mannheim to watch the merrymakers.

We got a good spot with the sun behind us – providing the warmth to stand in the otherwise chilly afternoon. And the parade began with the “polizei” leading it on horse-backs. It was quite nice to see the policemen also singing along with the revelers :-). D informed me further that the participants of the parade belong to various Fasching clubs of the city. There were more than one Fasching Queens/Princesses and we assumed that they belonged to different clubs who would have chosen their own queen or princess. After watching the parade for quite some time (and having clicked enough pictures), we started feeling the cold on our backs as the sun was also moving away. So we decided to move on towards the “strassefasching’ which was basically the food and drinks stalls in the street. We found a tent which had a heater and was selling “glueh wine” (hot wine) which is actually had during Christmas time but probably it continues as long as there is winter. Once we felt that we could once again feel our hands and tips of the frozen noses, we proceeded further. After having seen some more of the parade from other vantage points, we decided to call it a day and moved on to get some coffee and cake in the next town – a perfect end to a lovely afternoon 🙂.

And here’s what I had at the end of the day – the loot from the parade (besides the candies that we already ate during the parade):

P.S. India also has a Carnival – in Goa (a tradition started by the Portuguese). However, I’ve never been there – so let’s see if I get to see that too sometime!

2 thoughts on “Fasching – Carnival in Germany”

Join 287 other subscribers
Follow Reflections on the river on WordPress.com

Join 287 other subscribers
Follow Reflections on the river on WordPress.com