I just don’t understand how time flies. It’s already more than six months since I was on that train to Koblenz – a beautiful  city with a history of around 2000 years, on the confluence of rivers Rhine and Moselle in Germany. I was wondering where could I go by myself on the weekend for a day trip and was taking advice from colleagues. That’s when I was introduced to the city of Koblenz. There’s a horticultural exhibition once every five years in one of the states in Germany. This year it was the turn of Koblenz.
Now the train journey takes quite some time – four hours, of course, I mean by the slow trains. But then there were some other trains on Sunday, the 1st of May, which could take me there in around three hours. So I bought the ticket for Sunday. Little did I know what was in store for me on that 1st of May – which as you know is also the International Labor Day!

So here’s what happened – I started from the guest-house with just a piece of bread because the breakfast started at 7:30 AM, it being a Sunday, and the train was at 8:00 AM – from the train station which was 2 k.m. away. I reached the station puffing and panting and waited for the train, which came and I boarded – just to listen to the announcement that it won’t go anywhere! Why? Because some people were walking on the railway tracks at the next station – just because it was Labor Day! So everyone cursed and got down from the train. Next train arrived at 9 AM and we got to hear that the people were still on the tracks and hence it wouldn’t start either! By that time of course, I had missed my planned connecting trains and was wondering if I should proceed with my journey or not. I called up colleagues to take their opinion and they suggested that I should still try going. So I took the details of the next connections from the blessed “Fahrkarten” machine – i.e. the automated ticket machine. Finally this train started! I also met a lady from Hungary who had traveled all night in the bus and then had to take the train to reach Boppard (a place close to Koblenz)!
Anyways, I reached Koblenz at 1:00 PM (instead of the planned 11:00 AM)! Now I had already read that the tourist information center at the station was closed on Sundays and I needed to reach the one in the old city center but somehow whoever I asked seemed not to guide me adequately. But then I met a local couple who were going to see the BUGA (that horticulture show) and they said I could come along with them. Bless them! They showed me the place from where I could find my way and I reached the Tourist Info Center.

There I got the map and I proceeded to see the city. The weather was lovely and so was the city. But I first needed some fuel – so I had a cheesecake with a coffee at a local cafe. Then I started. Now there was not much time with me as I also needed to get back to the guest-house in time – another ill-fated journey where I missed the fast connections because of the first train reaching 10 minutes late! But that’s not so important. Let me show you what I saw.

So – I started from Jesuitenplatz, the place where the information center was and found this interesting statue of a boy who spurts water from his nose!
Thereafter, asking people for directions, I reached the place from where the cable car was to start. I bought the ticket and stood in the long queue. People were really enthusiastic about the show!
The cable car ride was short but great! I’d never crossed a river via a cable car and that too to reach the top of a hill on the other side of the river! 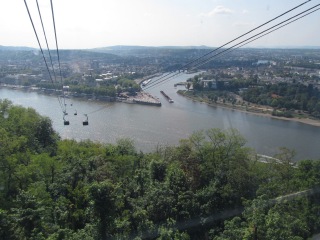 As you can see in the picture, the V shaped point is called the Deutsches-eck and is the confluence point of the rivers Moselle and Rhine. It has the statue of Karl Wilhelm (it’s a newly constructed one – the original was destroyed during World War.)

On reaching the hill which houses the fortress called Ehrenbreistein, I found myself looking at a beautiful landscape created for the flower show.
But the most interesting thing that I saw there was not the regular flowers but what I’d studied in Biology at school – the Pitcher Plant (Nepenthes).

For those who don’t know, these plants trap insects in their pitcher shaped structure for food!

I also got to some varieties of mushrooms! Not our cute button mushrooms but really huge ones! 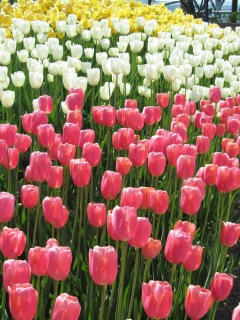 Then I also saw some rows of lovely tulips. I was reminded of a song sequence from a Bollywood movie where the actors are singing in fields of tulips :-).

After roaming about the place and taking in all the sights, it was time to go down. On reaching down, I saw one church near the Deutsches Eck and then walked towards the second site of the show which was the Electoral Palace. Capturing the sights from there, I walked to the station to end my tour of the lovely city.
(The day was not to end so soon..the trains were not so good to me that day.)
It was a day well spent and I guess I could go there again – even if just to experience the beautiful route that the train took.